What I ate vegan in Brussels, Belgium 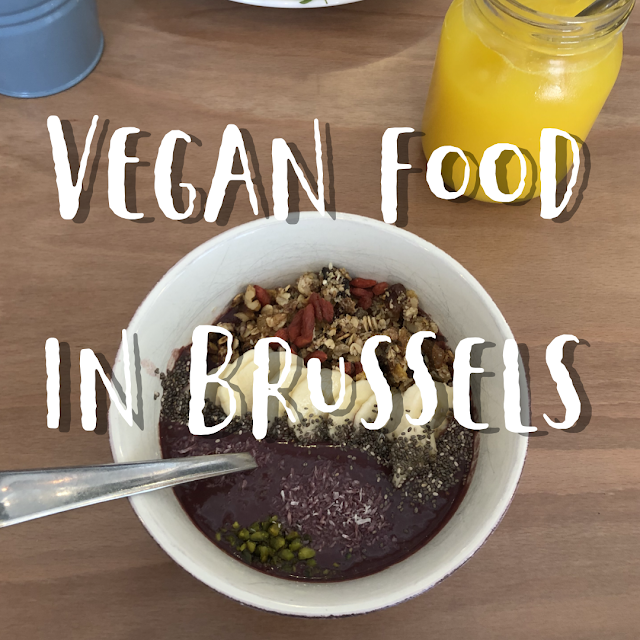 On our first morning in Brussels we headed to Peck 47 to find it was a very popular brunch spot, the most popular choice seemed to be eggs and bacon on Belgian waffles. They had 2 vegan smoothie bowls on offer and a vegan banana cake. 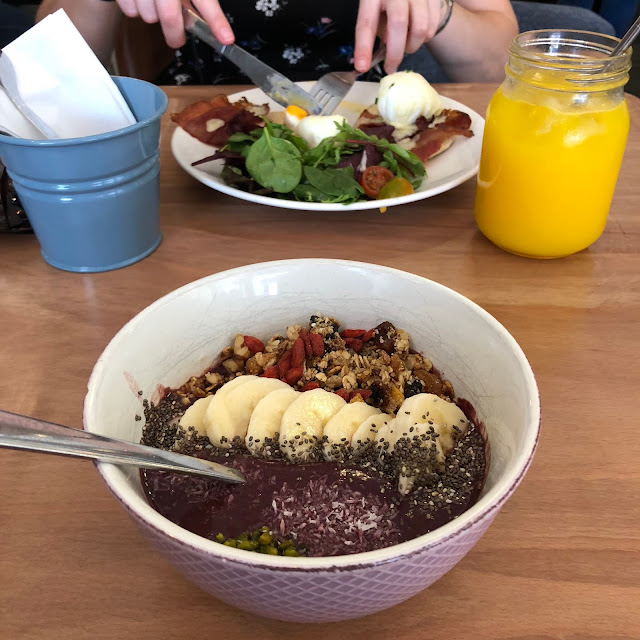 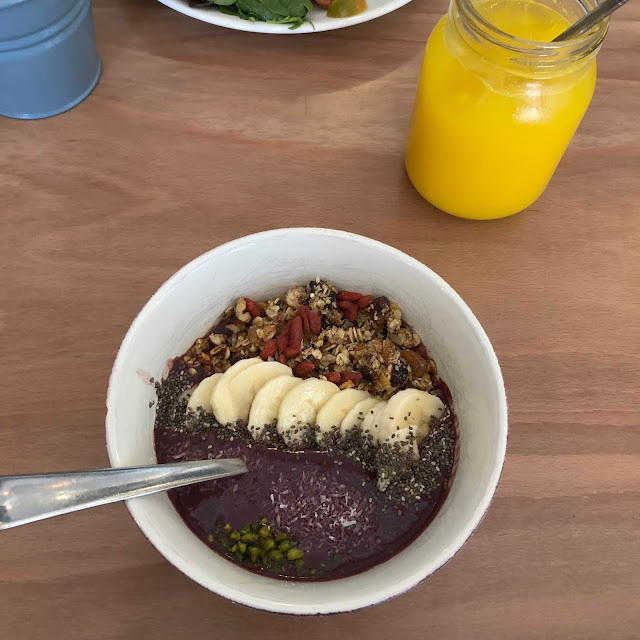 I went for the Brazilian Blast smoothie bowl with acai berry, orange juice and banana. It was topped with chia seeds, homemade granola, coconut flakes, goji berries and crushed pistachio. It was really tasty and a nice fresh breakfast.

The sister cafe specialising in countless Belgian beers and had a huge selection of sandwiches and wraps, salads and soups, many of which were vegan. 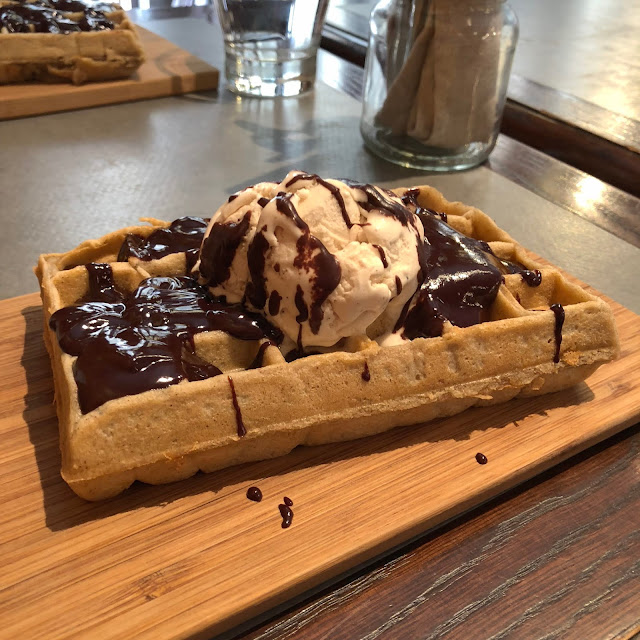 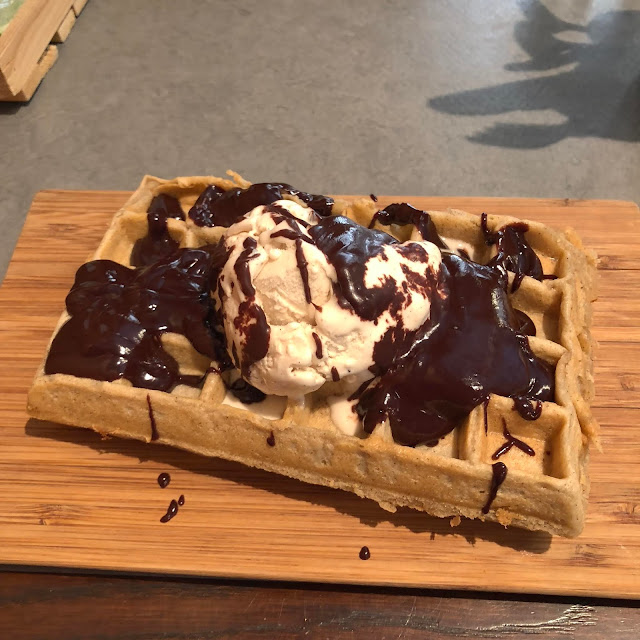 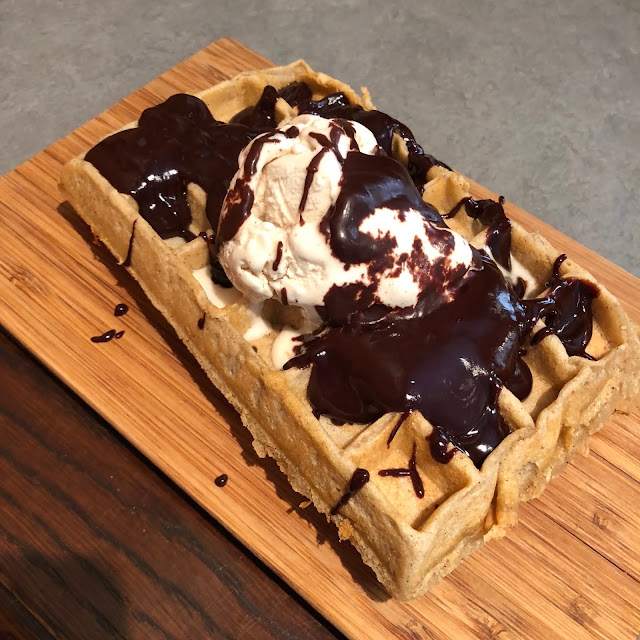 However, we went for the vegan waffles! All of their waffles are made with chickpea and rice flour and banana and are served with a choice of agave syrup, dark chocolate or dark chocolate with vanilla soy milk ice cream.

The waffles were lovely but I would say they had more of a banana bread/ cake texture. They went perfectly with the rich dark chocolate and ice cream although I did struggle to finish my waffle!

As I was visiting Brussels for a friend's birthday, it was her choice where we went for dinner. She decided on the Hard Rock Cafe. 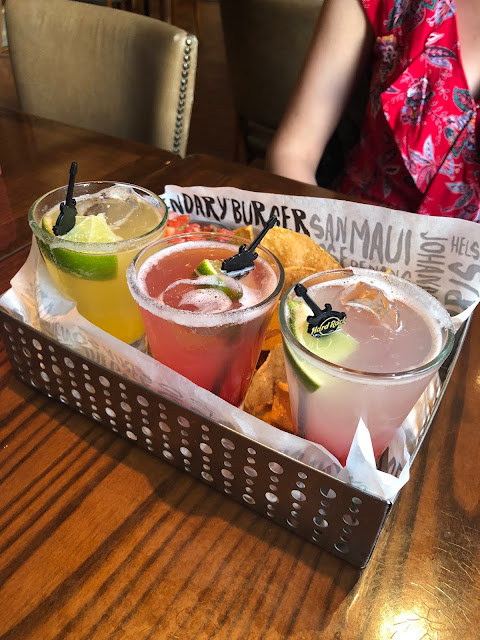 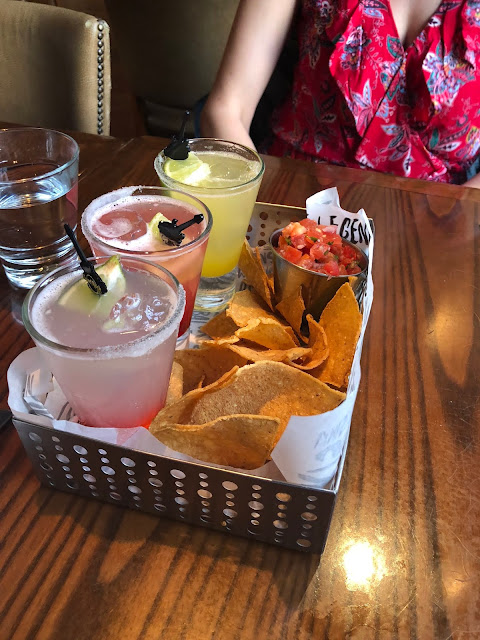 We started with a Margherita selection and could choose 3 different flavours to taste with tortilla chips and salsa. I then ordered the Veggie Ledgie burger without cheese or mayo. The waitress asked if I was vegan and then told me there was actually egg in the burger pattie. However, I decided to go with it anyway as I had my heart set on it by then. 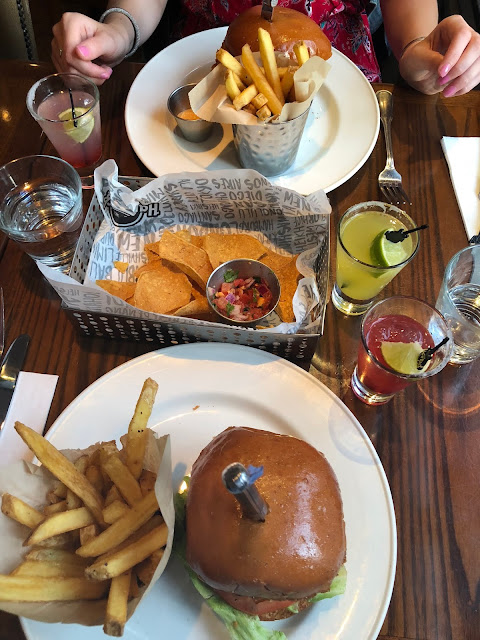 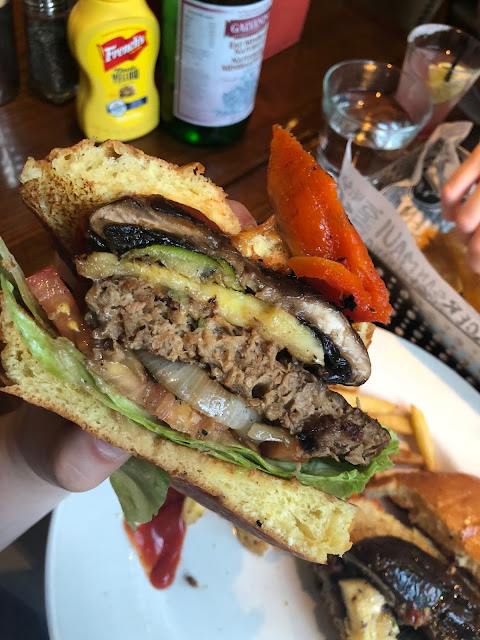 I really enjoyed the burger and loved all the grilled veggies stacked up on the top of the burger.

On our final morning in Brussels we went to Le Pain Quotidien for breakfast. They had a few vegan options including a blueberry muffin which I shared with a friend. I went for the granola parfait as there was the option to have it with soya yoghurt. It was really fresh and delicious. The muffin was also really good and I enjoyed the combo together. 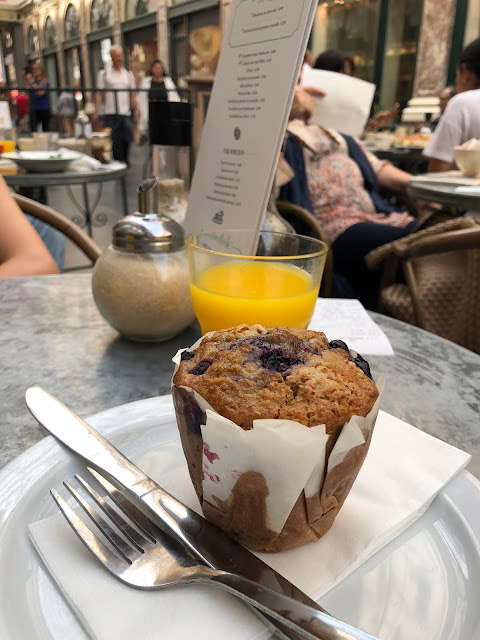 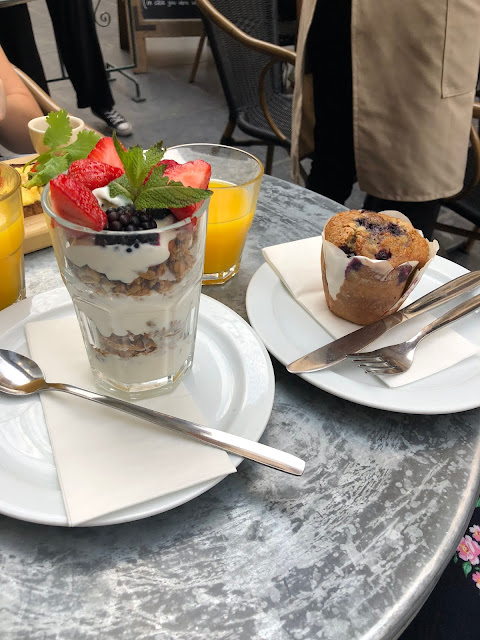 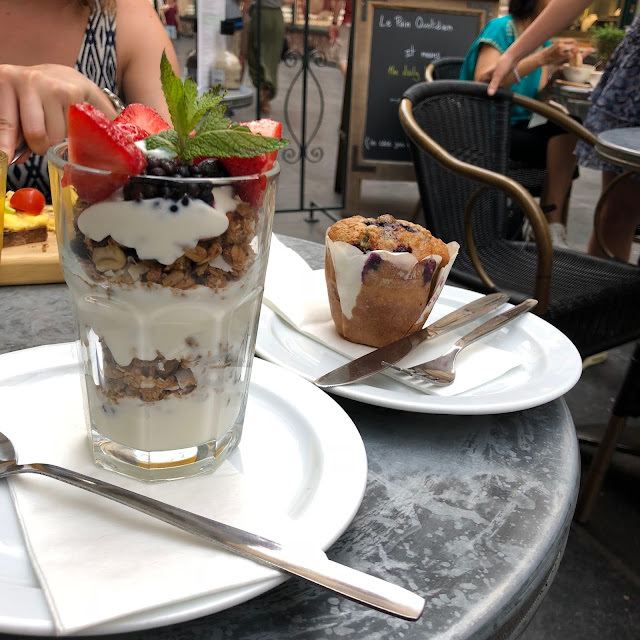 Brussels is full of beautiful chocolatiers, all of which offer dark chocolate options. However, many only offered dark chocolate truffles with milk or cream in the praline centres. Intruiged to find some different vegan options, we went to Le Comptoir de Mathilde. They have a huge selection of milk and dark chocolate pieces with different toppings including Speculoos biscuits, nuts and cocoa nibs. I also picked up some dark chocolate covered hazelnuts. 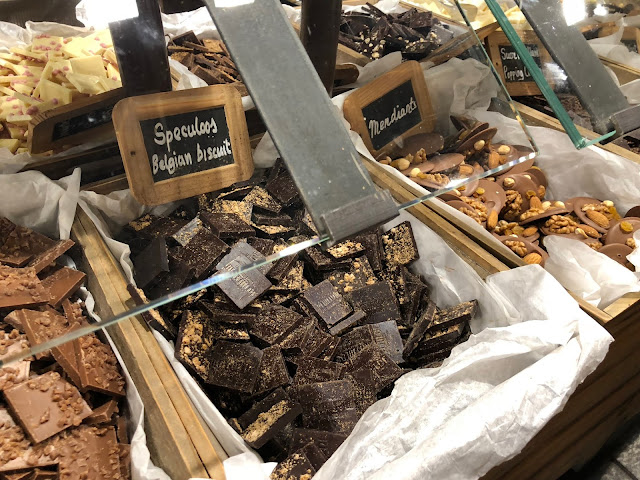 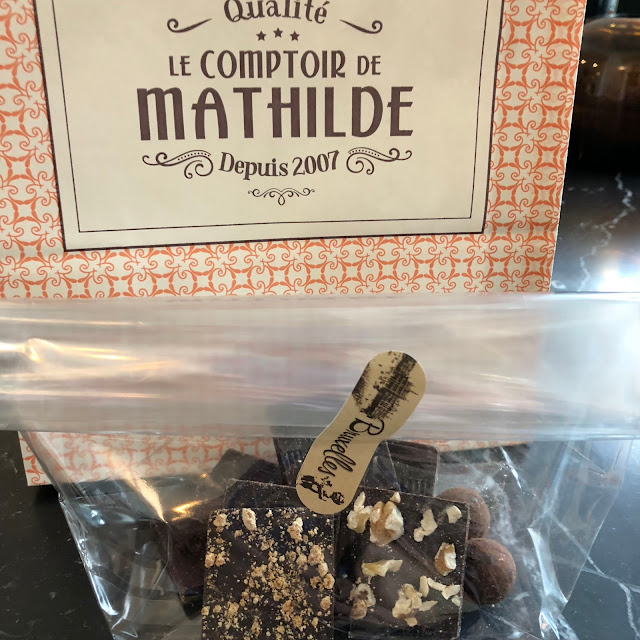 Our airport bus left from Brussels Midi station and we had time to grab a quick lunch there. I went to Greenway which is a vegetarian bar offering burgers and wraps. They also had some salads and vegan cakes and a brownie on offer. 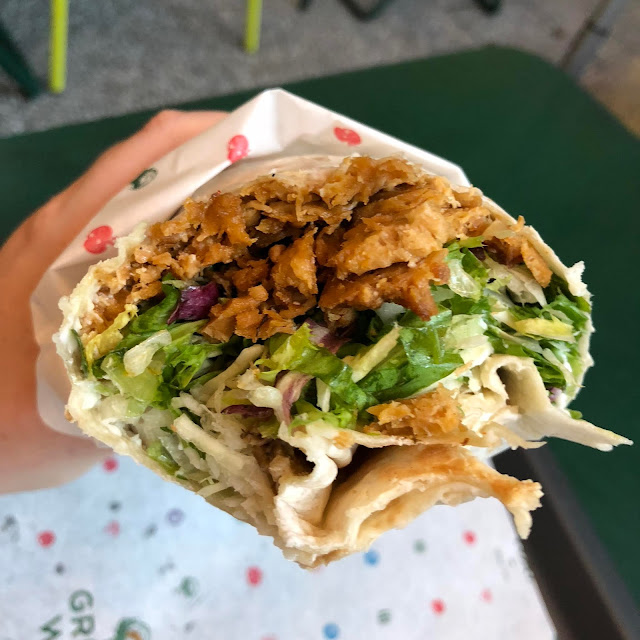 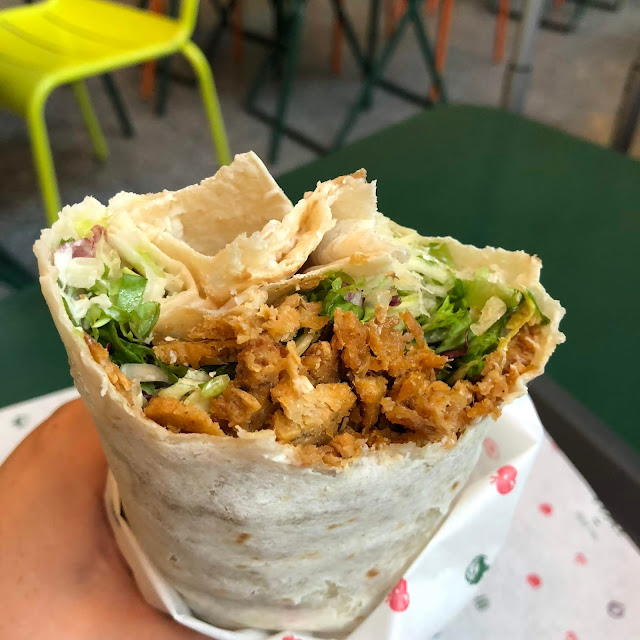 I went for the Greenway's Kebab Wrap which had vegetable kebab, tomato, red onion, white cabbage and salad. It has a lovely homemade garlic mayo and although delicious, I was tasting it for a while after. I wouldn't recommend eating it before a date!


There are certainly a lot more vegan options to choose from in Brussels, it was great to have so much choice!

Vegasaurus Abroad
Hey! I'm Sammy, a 20 something traveller who has recently turned vegan. Oh... and I love dinosaurs! I'm currently teaching in an international school in Rome. Join me on my search for delicious vegan food everywhere I go! 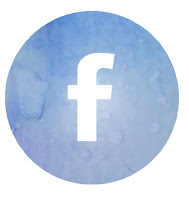 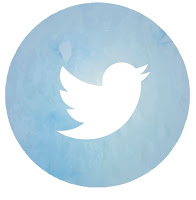 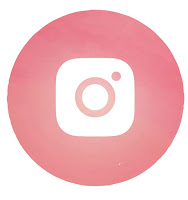 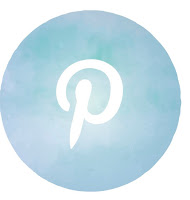